Have you considered VELO nicotine pouches? They aren’t tobacco pouches, but a tobacco-free* alternative and an easy way for existing adult smokers and nicotine users to consume nicotine on the go.

Smell, like taste, is one of the most important senses, and is one of the contributing factors when it comes to processing taste too. With such a variety of VELO pouch flavours available, we decided to find out which smells linked to VELO pouch flavours were the UK’s favourite. Then to take this data one step further, we decided to uncover the UK’s favourite smells across other areas of life, such as the outdoors and cleaning, to see which smells the UK has been missing the most during lockdown.

Using a survey, we asked 2,000 people to choose from some of the most common scents to find out which smell would come out on top, and which smell people would rather live without. We asked respondents to select up to three, five or ten smells from our pre-defined lists of smells to determine which were the most or least popular.

Respondents were also analysed by age, gender and city to look at how those characteristics can influence reactions to different scents. 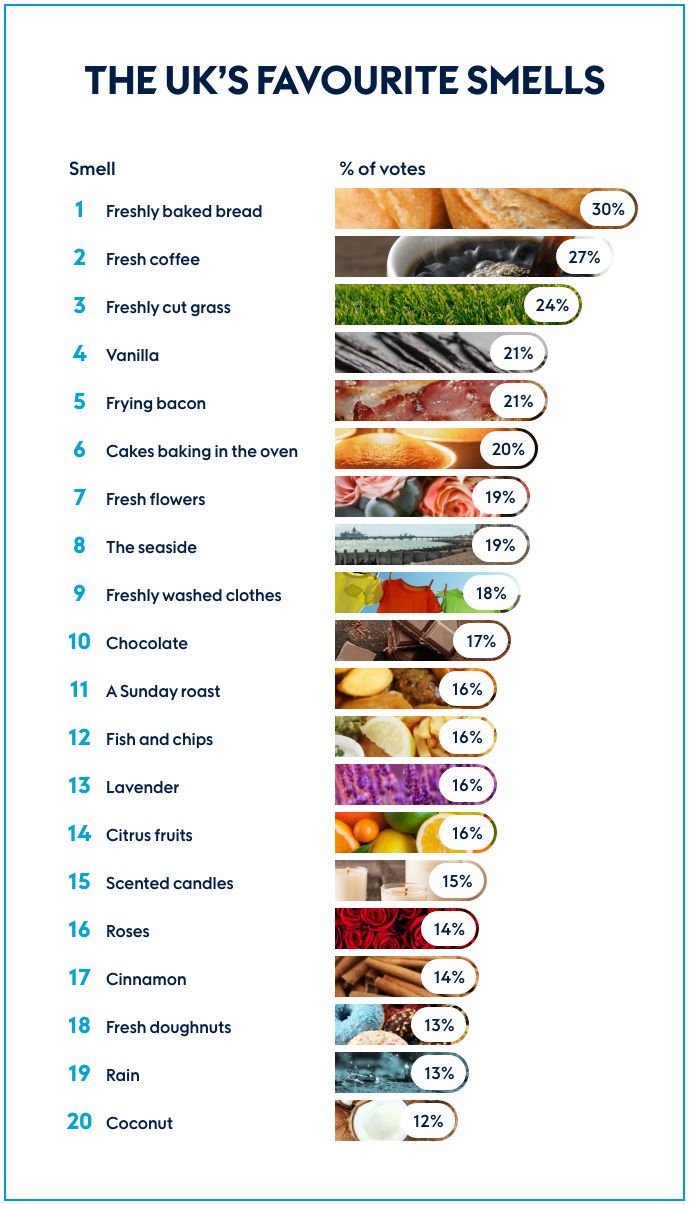 Following closely behind the top spot is the smell of fresh coffee (27%). This is also the most picked choice of smells from respondents in these UK cities: Plymouth (35%), Sheffield (32%) and Leeds (31%). The third favourite scent in the UK is freshly cut grass – the first of the outdoor smells. Almost a quarter of people surveyed (24%) chose freshly mowed grass as one of their top outside smells. Interestingly, it is a greater favourite for those living in big UK cities; respondents in Brighton (35%), Liverpool (34%) and Nottingham (26%) all chose it as one of their top smells. 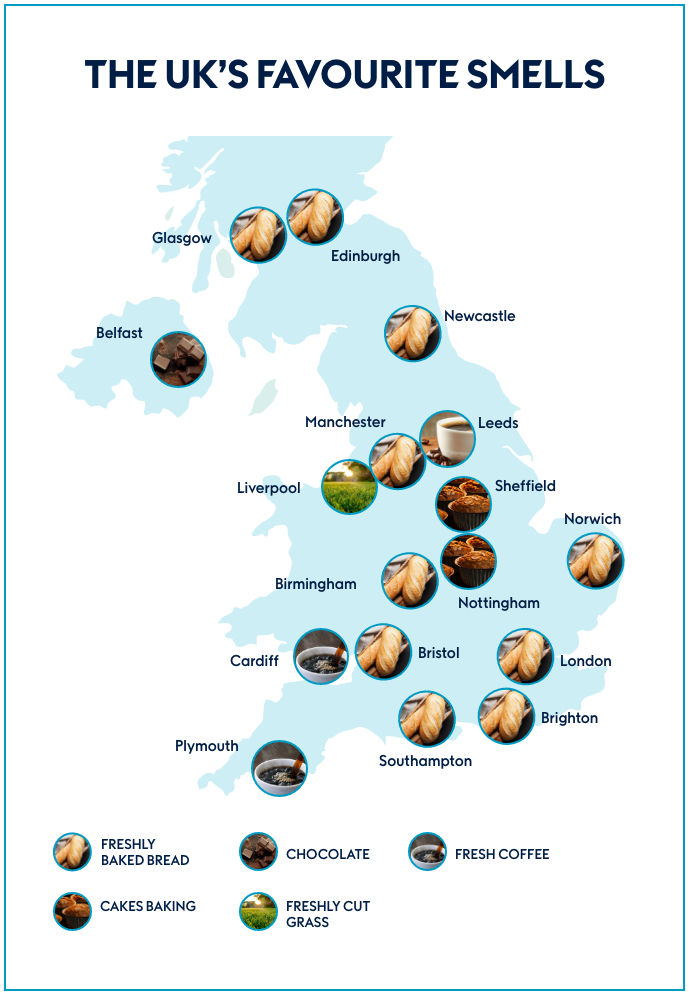 This category looked at some of the most common smells associated with spending time outdoors.

We also found that fresh outdoor smells, like cut grass, are more preferred by the women surveyed than the men (25% vs 22%). 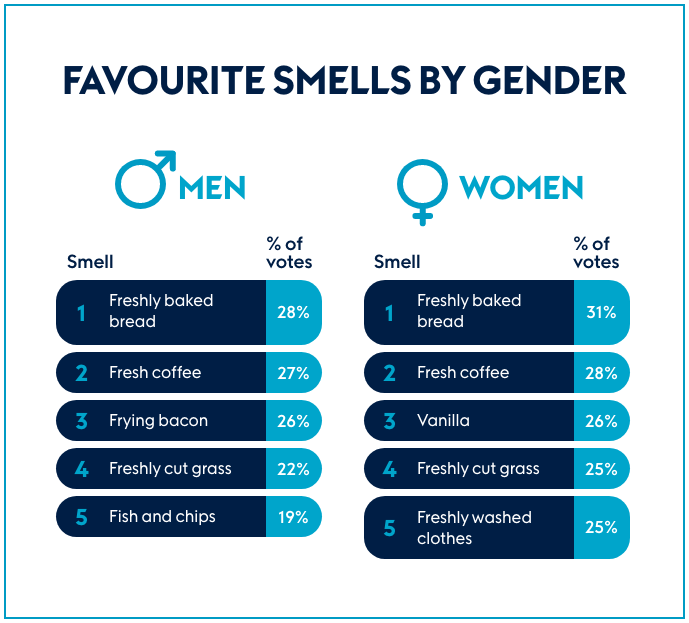 Nicotine pouches are a convenient alternative for existing adult smokers and nicotine users, and come in a wide variety of flavours to excite your taste buds.

It’s often the case that if you like the smell of something, you’re going to like the taste of it too. So, to find the UK’s most-liked VELO nicotine pouch flavour, we looked at which smells were the most popular and linked those to VELO nicotine pouches flavours.

‘Fruity’ smells (like those associated with Tropic Breeze) were chosen as the favourite, with almost half of respondents (46%) listing this as one of their most appealing categories. Other top results included berries (40% like Ruby Berry) and menthol (29%, like Polar Mint). 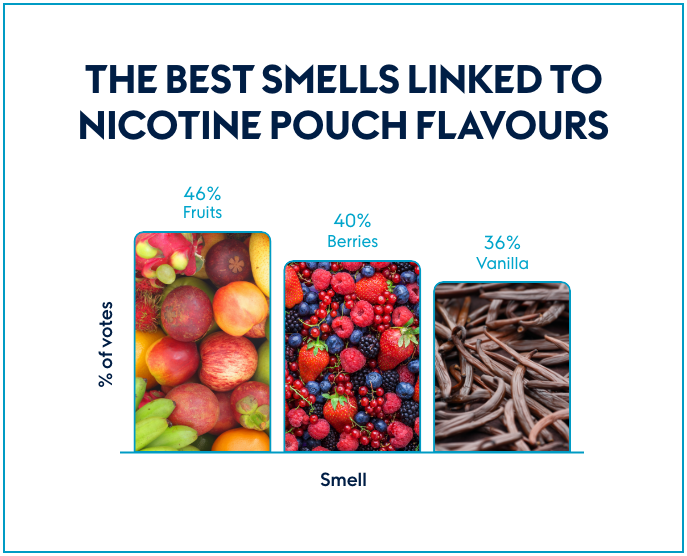 Freshly baked bread beats everything else to the top of the board in most regions around the country, however, in the North East, the smell of frying bacon came out on top (27%). In Wales (28%), Yorkshire and the Humber (29%), and the East Midlands (29%), the smell of fresh coffee sits firmly as the favourite foodie smell. Greater London enjoys the scent of vanilla the most (25%), and for Northern Ireland, the smell of chocolate (38%).

The clean, comforting smell of freshly washed clothes is the UK’s favourite cleaning scent (18%). The cities that are home to those who chose this smell as their favourite are Sheffield (30%), closely followed by Cardiff (27%) and finally, Belfast (26%).

The smell of freshly washed clothes beat relaxing scented candles (15%) and the smell of a newly deep-cleaned house (10%). It is also a more prevalent favourite with the women surveyed (27%) than with the men (16%).

Cleaning smells also emphasised generational differences. For the younger respondents (aged 25-34 year olds), shampoo is one of the most highly rated cleaning scents (11%), whereas furniture polish is a favourite for the over 55s surveyed (10%) only.

Unsurprisingly, 62% of those surveyed think that vomit is one of the worst smells of all, and the results of our analysis show that this smell is considered one of the worst by females primarily, compared to the male respondents (70% vs 54%). The smell of vomit is disliked more than sewage (59%), body odour (45%) and nappies (33%). 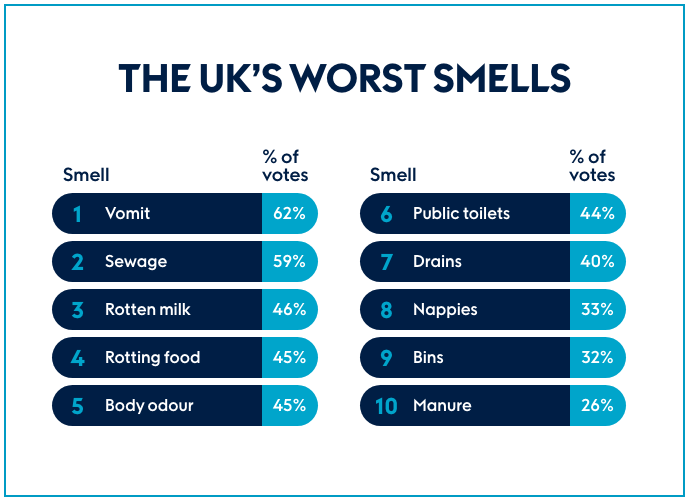 From food and nature to cleaning products, our favourite smells are often linked to things we enjoy and are familiar with.

Throughout all the categories we analysed, it is smells surrounding baked goods and fresh food that are the favourites. Thankfully, VELO has pouches in flavours that match some of these top choices. So you can get a taste of the UK’s favourite smells whenever you like.

Find out more about VELO and explore the wide range of VELO nicotine pouch products available to suit your taste.

*This quality does not necessarily mean this product is less harmful than other tobacco products.

18+ only. VELO nicotine pouches contain nicotine which is addictive. For adult nicotine consumers only.

What are the smoking rules at airports?

More than six in 10 nicotine users* admit they feel anxious about not being able to smoke or vape once they get through airport securit...

ARE NICOTINE POUCHES ALLOWED ON PLANES?

Learn the regulations about taking lighters, cigarettes and e-cigarettes on a plane.

What are nicotine pouches made of?

VELO nicotine pouches. To use this website you must be aged 18 years or over

Please verify your age before entering the site*

I am under 18 I am 18 or over
*18+ only. This product contains nicotine and is addictive. For adult nicotine or tobacco consumers only.

Always be the first to know

Get updates direct to your inbox

Thank you for signing up.

Please check your email inbox to confirm your subscription to our newsletter.

Your basket is empty